The Shadow of  Saint Nicholas 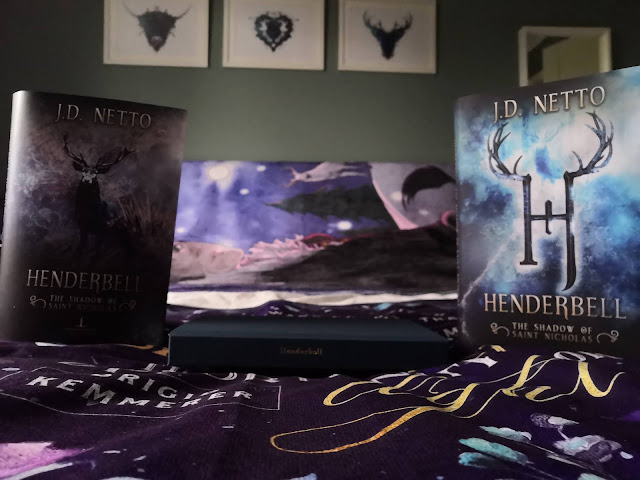 "Maybe this was the reason why I always felt like an outsider growing up. I never belonged in the ordinary. I was born to live amidst magic." Enzo Griffin
Enzo and Ava Griffin never expected to face their worst nightmare on Christmas eve. Though they always dreamed of magic, they never thought of its actual existence, and the consequence it carries. During a violent snow storm, they're visited by foul creatures called Shadow Spirits. The eerie beings kidnap both of their grandparents, vanishing into a portal found on the bark of a tree.
After the frightening incident, Enzo and Ava discover Henderbell, a world full of magic, wonder, and secrets. But an impending doom is revealed to them. The king and queen of Henderbell are missing, and their absence could trigger the destruction of this new-found world and the human realm. On the quest to find both Henderbellian rulers, Enzo and Ava learn of a curse placed upon their own bloodline. But other ancient enemies have risen from their graves, seeking revenge for a past unknown to them.
Enzo and Ava find friendship, courage, and love as they face unimaginable darkness in the quest to redeem the world they belong and the one they live in.
Can you discover the curse hidden in the shadows?

Born in a small town in Brazil, J.D. relocated with his family to the United States when he was eleven years old. At an early age, J.D. discovered his passion for fantasy stories and alternate universes. His first book series, The Whispers of the Fallen, has captivated readers around the world, becoming a prominent voice in young adult fantasy. The series spawned four books, with releases happening at BookCon in New York City and Books and Books in Miami. The second installment, The Whispers of the Fallen: Rebellion, was one of the bestselling titles at BookCon 2014.

J.D. Netto is the founder of the Saved by the Page movement. The project gained such momentum, it became a published anthology featuring stories written by readers on how books saved their lives. The project led J.D. to partner with studios adapting books to the big screen. Love, Simon and The Hate U Give were amongst the featured titles.

His latest independent release, Henderbell: The Shadow of Saint Nicholas, was an Amazon bestseller. The book’s limited edition copies sold out within a few weeks after its announcement.

He is the artist behind all his covers, maps, and character concepts. J.D. worked with HarperCollins in 2018 to create the cover for the New York Times bestselling title, Zenith: The Androma Saga.

Henderbell is a beautiful created story with a lot of Shadows hidden in everything. I personally read it after Christmas and around New Year. It gives a new perspective on all Christmassy stuff and is finally not that typical Christmas book with all of a Lovestory, that most other authors need to write. It brings a fresh wind in all Christmas traditions and has a storyline which also non mother tounges can follow pretty easily.
I personally loved it a lot. Only one wee thing isn't that great about it, but that's my personal taste. There are a few Charakters which develop kind of a romantic relationship but no matter what happens (spoiler ahead!) they won't end up together. A tragedy ends this possibility of a romance. I personally would have wished for a romantic ending for them but that's unfortunately not what you will find.
Except of this wee thing I loved reading this book. JD binds you to this book with never ending excitement for what awaits you on the next page or the next chapter, whatever comes first. His writing style never lets you down and his storylines as dark and hopeless as they may appear, they always finde some kind of a way to lighten up again.
What I loved especially is, that even while reading the story and thinking about who's the bad guy who plays nice, well in most books you're right with your thoughts to it, but not in this one. Even near the end I was surprised how he made it all come together but till the last second keeps his readers guessing who it might be. That's very refreshing for a change and this wee thinking challenge is always nice to play when you read a book by JD Netto. Another great Novel on the list of his works.

I love all tree covers. Yes right, three! I love the natural book with just the golden letters on the side and the both individual designed ones. JD created them and the gave the maybe most important but yet not that present creature of the book a figure. They all have their good sides and make it hard to decide which one to choose for reading.
Star points:
Content: 5/5
Writing Style: 5/5
Cover: /5
Need to go on reading: 5/5
Average Stars: 5/5